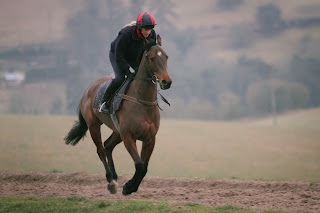 Cheltenham will run the inaugural St Patricks Day Derby in aid of Cancer Research UK. St Patricks Day is the third day of The Cheltenham Festival and the race gets underway at 5:15pm. It features 12 riders and each of the 12 horses involved must have appeared at least twice under rules. Racing legend Henry Cecil is the guest of honour on the day; it will be his first visit to the Festival. Attending the Festival with Mr Cecil will be the Niarchos Family whose famous silks will be carried by Lorna Fowler aboard Plato. The race will be covered by RUK and if you are on course you can bet on your choice on the Tote.

JP Festival caught up with Chloe Bowkett, Events Manager at Cheltenham Racecourse who is one of the lucky 12 who will line up on 17 March. We asked her a few questions which she very kindly answered.

JPF:  What are your personal reasons for wanting to take part in the race?
CB: I have had family members and friends diagnosed with cancer. Also, the honour of riding around Cheltenham, it’s a dream come true, I am so excited.

JPF: What horse are you riding and who are you riding for?
CB: The horse I’ll be racing is a 6 year-old called Ambrose Princess trained by Michael Scudamore. Owners are Chris Coley and YesNoWaitSorries Racing Syndicate.  I’m also going to be racing in their traditional “scrambled egg” colours of Red and Yellow, which are the colours of the Marylebone Cricket Club (MCC) who play at the Lord’s ground. The syndicate is closely involved in the MCC as well as the Gloucestershire Gipsies Cricket Club.

JPF: Who would you say is your biggest danger to victory in the race?

CB: I don’t know but the person I most want to beat is Alice Plunkett!

Many thanks to Chloe for answering these questions and all of us here at JP Festival wish her the best of luck!

If you would like to sponsor Chloe please do so at www.justgiving.com/chloe-bowkett

At the time of writing Chloe has so far raised an amazing £10,255 in sponsorship.

The remaining 11 lining up alongside Chloe are:

Lorna Fowler: RUK Presenter & Broadcast Journalist. Will be working for Timeform Radio at The Festival.  Daughter of Sue Bradburne and sister of Mark Bradburne. Rides Plato, for guest of honour Henry Cecil and has been regularly riding out at Warren Place in the run up to the race.

Rachel Wyse: Sky Sports News presenter who represented Ireland at junior level in Show Jumping and competes in eventing competitions. Will be riding for Jonjo O’Neill and J.P McManus. Rachel very kindly sent us this quote:  “It’s set to be an incredible day for such a worthy cause, Cancer Research, and it’s safe to say I’m very excited and equally nervous about the race. Getting help from some of the best in the business, AP McCoy, Jonjo O’Neill and Andrew Balding, and a horse from legendary Irish owner JP McManus makes it all that bit more special. If I raise a nice amount of money for the charity and get through the finish line in one piece it will all be worth the hard work!”

Killian McCarthy: Brother in Law of Ruby Walsh. Regularly rides out for Ted Walsh. Works for SoftCo in Ireland and led up Dabiroun and Nina Carberry who were victorious in the Fred Winter at the Festival in 2005.

Guy O’Callaghan: Works for Yeomanstown Stud in County Kildare. Lives at the stud too and is involved in the family business of pinhooking and breeding. Is the cousin of Michael O’Leary; Ryan Air giant and leading owner in Ireland.

Andrew “Frostie” Kelly:  Was apprenticed to Aiden O’Brien for five years. Rode winners over jumps and on the flat. Now a jockey’s agent.

Rodger Sargent: Works as an adviser to Ila Security. Owned Tikram and Top Cees, both previous Festival winners. Has ridden in Charity Races before (Market Rasen 2004 and Fontwell in 2010). Regulary rides out for Gary Moore.

It is reported that £95,000 has already been raised in sponsorship for the race; the target is £150,000. It would be fantastic to see the monies raised go past the £200,000 mark. Henry Cecil summed up perfectly what fantastic work Cancer Research do with this quote that he gave to the media about his involvement in the day’s proceedings; “Cancer is an illness that touches most families at some point and my family is no different, so it will be marvellous to be able to play a small part in helping to raise as much money as possible for Cancer Research UK, a charity which does so much to help the fight against this disease”.

With thanks to Chloe for the interview and to Rachel for the quote.

Delta Work has momentum ahead of Cheltenham Gold Cup challenge