You are here: Home / Archives for JPFestival.com TV

Join us here on Tuesday 17 September from 7.30pm for a live 15 minute video broadcast with a preview of the Kerry can also watch on YouTube at http://youtube.com/JPFestival and on our Google+ Page.

It’s the Galway Festival this week and the JPFestival.com team preview the key Jumps Races. You can also watch on our YouTube channel and Google+ Page.

Watch our broadcast from Easter Monday in which when a panel of horse racing writers, analysts and tipsters preview Thursday and Friday from Aintree. Special guests are Ian Robinson, owner of Imperial Commander who announces the decision on Imperial Commander’s participation in the Grand National and Tom Thurgood, Journalist and Writer who’ll be working at Aintree for Channel 4 Racing.

Visit this page or our YouTube channel next week to watch a panel of horse racing writers, analysts and tipsters preview Aintree and the world’s greatest horse race, The Grand National. We’ll also be joined by special guests Ian Robinson, owner of Imperial Commander and Tom Thurgood, Journalist and Writer who’ll be working at Aintree for Channel 4 Racing. On Easter Monday we’ll be previewing the Grand Opening Day (Thursday) and Ladies Day (Friday) and on Friday we’ll be previewing the Grand National and Saturday’s races. Both JPFestival.com TV live broadcasts will start at 7pm. You can watch recordings of the shows shortly after they’ve finished. Monday’s programme will include:

Select the Subscribe button below to be notified about future JPFestival.com TV videos.

Watch the recording above of our JPFestival.com TV Cheltenham Festival Review! A panel of horse racing pundits and analysts plus special guests Geoff Banks, the UK’s leading independent bookmaker, Rory Delargy of Timeform Radio and Kevin O’Malley of GG.com review races from Cheltenham Festival 2013. Due to a technical problem at Google the broadcast finished prematurely so apologies if that spoilt your enjoyment.

We’d love questions and comments on the broadcast so please tweet @JPFestival or comment below. Thank you!

Our next broadcast will be an Aintree Preview on Easter Monday from 7pm.

Watch our Broadcast from Monday 4 March when we teamed up with Imperial Racing for a special Cheltenham Festival Preview Online Event. ALL 27 Cheltenham races previewed. 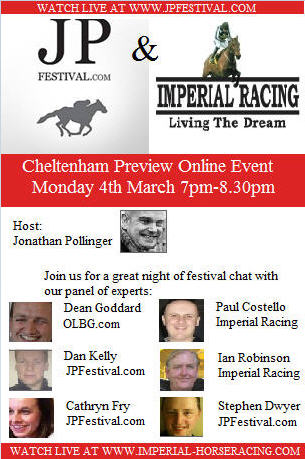 Watch our JPFestival.com TV Broadcast which is devoted 100% to your questions in a Cheltenham Festival Q and A. Questions were received via @JPFestival on Twitter and on our Facebook Page. Please comment below if you have any additional questions.

Watch below for a JPFestival.com TV Broadcast with previews of Triumph and Albert Bartlett at this year’s Cheltenham Festival, with special guest Paul Costello.