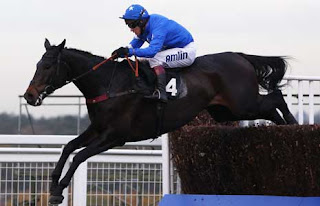 Quinz showed battling qualities to land the Racing Post Chase and in doing so paid a handsome compliment to RSA favourite Time For Rupert who beat Quinz into 3rd at Cheltenham in December. On the run from the last it was nip and tuck between Quinz and 50/1 shot Mount Oscar who ran a huge race but Quinz dug deep and past the post 1 ¼ Lengths in front. The race was run at a gruelling pace as Safari Adventures set a blistering gallop that had several of his well fancied rivals toiling early on.

Favourite Fistral Beach blundered at the first fence and never really threatened at any stage with the well backed Bakbenscher unseating Robert Thornton after putting in several bad jumps. Quinz holds an entry in The Stewart Family Spinal Research Handicap Chase at the Festival but both Richard Johnson and Phillip Hobbs feel Cheltenham is not his track. He would also prefer better ground which makes his win today all the more admirable. Quinz is generally available at 10/1 for the Cheltenham race.
Cathryn Fry, 26 February 2011