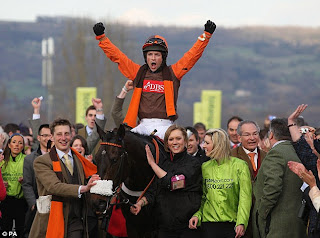 Remember as a child the feeling you would get when your parents would be stripping the Christmas tree of its glamour on the twelfth night? You would watch with a long face as the threadbare tree was taken out to the garden and the decorations were packed away, only to see light of day again in twelve months’ time. Adding to this melancholia was the knowledge that it was soon time to return to school and that you had neglected to do any of your homework! Multiply this feeling by 100 and you get somewhere close to how we all woke up Saturday morning; the day after what was possibly one of the most thrilling and emotional  Festivals in recent history.

Tuesday’s personal highlight for me has to be Hurricane Fly (regular readers have just yawned!). As you all know by now I fell in love with him at Leopardstown and mentioned his name every day in the seven weeks that lay in between Irish Champion Hurdle day and Cheltenham! Brilliant is the fact that both he and the brave Peddlers Cross silenced their doubters, these two horses are exceptional and if I close my eyes I can still see them jumping the last practically in tandem. We may never see them lock horns again with Peddlers likely to go chasing next season and “the Fly” set to return to defend his crown, so savour that moment. Hats off to the Gentleman that is Donald McCain who was the first person to congratulate Willie Mullins in the winner’s enclosure post race.

There were two horses that made me eat my words this Festival; the first being Captain Chris. I honestly thought Cheltenham and a fast two miles would put too much pressure on his jumping which had been sketchy and markedly right handed in previous starts. I was wrong! He won the Arkle going away and has to be a major player in the top division of chasers for the next few seasons. I would love to see him in the King George taking on Long Run (more of him later!)

Another Tuesday highlight has to be Bensalem who had been such a sick horse that he nearly died. His battle with Carole’s Legacy up the hill raised the most fabulous noise from the stands so much so that the commentator was drowned out! I cannot mention Tuesday or the highlights without mentioning Quevega in what was quite simply a procession! I would love to see this mare take on the boys in the World Hurdle. Apparently she heads to Aintree to serve it up to Peddlers Cross in the Aintree Hurdle, that thought makes my mouth water and sparks a new excitement on this day so dominated by Festival blues!

As much as I wanted Big Zeb to win the Champion Chase again, I was over the moon to see Sizing Europe take the crown. He continued the amazing record of Arkle winners in the race and the confidence behind him emanating from Ireland was spot on.

Bostons Angel provided consolation for Robbie Power and Jessie Harrington in the RSA Chase after Oscars Well had blundered at the last in the Neptune when travelling ominously well. That race provided two of the rides of the meeting by Davy Russell on First Lieutenant and Daryl Jacob on Rock On Ruby who were split for first and second by only a short head.

More Wednesday highlights have to be Ireland taking the first six races and Paul Townend riding his first Festival winner in the Fred Winter for Arthur Moore on What A Charm. There are sure to be plenty more to follow in Festivals of the future.

Two words dominate Thursday and they are BIG BUCKS! Ruby’s reaction to the victory said it all. Interesting was Ruby’s comment after the race that he feels the horse would go close in a truly run Champion Hurdle as was his pre race comment of “Big Bucks would run in and win a World Hurdle on a Thursday then run in and win a Gold Cup on a Friday!” We are blessed with his greatness, long may he reign!

Another highlight on a glorious sun baked Thursday afternoon was Albertas Run who is surely the most underrated horse in training taking the Ryanair for the second year running. With good ground and a bit of spring sunshine on his back he is a superstar! Now a winner of 4 Grade One’s, 3 of those at the Festival in 2008, 2010 and now 2011. Final word on Thursday goes to Holmwood Legend and Keiran Burke in the Byrne Group Plate; I absolutely roared them in without a penny riding on their wonderful backs! What a story this was; trained by the soon to be retiring Pat Rodford with Kieran set to take over the mantle next season. With their Sparky May running her heart out to be second to Quevega on Tuesday this Festival proved the perfect retirement gift and proves that dreams really can come true.

I dedicate the whole of Friday to what was the most exciting Gold Cup I have seen since Dessie won in 1989! I also dedicate the whole of this Cheltenham reflection to Long Run who was the second horse of the week to make me eat my words and I have never been happier to do so!  The only word I was capable of speaking in the aftermath of this race was “wow” I didn’t think Long Run could do it and what makes his performance even more brilliant is the fact he made some notable jumping errors throughout the race. I burst into tears when Kauto Star and Denman took the third last together which became a steady river when they were upsides on the home turn, I them continued to blub throughout the hero’s reception that they rightfully received. I think in Long Run we have seen the next triple Gold Cup winner for sure. Thank you Long Run I salute you, I have never been so happy to be proved wrong!

Festival Lows: The fatal injury to Lush Life (RIP), the idiot protestor who could’ve injured or even worse killed one of our brave horses and jockeys in the final stages of the Ryanair, Young Willy Twiston-Davies inconsolable after his fall on Baby Run – fear not Willy you are set for greatness! Last low; being ill on Gold Cup day and not getting to see that epic race live and missing meeting up with you all at the tweetup. Hopefully I will meet you all soon.

It’s Sunday as I wrap this up and the sun beats down on Cheltenham but the atmosphere outside my door is flat because you have all gone home and the cheering has stopped. Roll on the 13, 14, 15 & 16 March 2012!

What did we learn from the Cheltenham November Meeting 2017?